Since April, I’ve been waiting to write definitively about where things stand in regards to steroids, silencers and Kentucky State Police.

Yes, you read that right.

There’s a few loose ends “On The Bourbon Trail”

Former Frankfort Police officer Mike Wells admitted to steroid use at the same time that Commercial Vehicle Enforcement Officer Steve Oliver admitted to the Franklin County Sheriff’s Office detectives that he had “gone in on orders of steroids with Mike Wells” and alleged ringleader Toby Curtsinger  “on several occasions.”

The only difference is to my knowledge since May is that Oliver hasn’t resigned.

Since May, the only response I’ve gotten from KSP is that an internal investigation would be conducted on Oliver and his alleged steroid use.

If Oliver admitted use to detectives and it is in public record is it still alleged at this point?

I’m waiting to get a definitive answer about the internal investigation or at least whether Oliver is still employed. I should have some answer Monday.

In 2014, KSP named Oliver one of the Officers of the Year along with five other vehicle enforcement officers.

Within those same documents, I am awaiting a response, even if it is a “no comment,” response from KSP Commissioner Brewer in regards to another officer.

In the same set of documents, not reported anywhere else I’ve read, is a statement regarding former Lt. Jerry Wise who is now Capt. Wise at KSP Post 5 in Campbellsburg.

During questioning, sheriff detectives asked Oliver “why Jerry Wise might be on Toby’s (Curtsinger’s) phone.

According to interview documents, sheriff detectives received a phone call from Capt. Jerry Wise, of KSP, in regards to the conversation they had with Oliver.

Wise “was angry that he had been mentioned in this investigation,” according to detectives “Wise stated he had never used steroids in his life,” and Wise “stated that he knew Toby from working out at the gym in Frankfort years ago,” like every other law enforcement officer mentioned in this case.

Wise said he had signed off on paperwork for Curtsinger to “obtain silencers and that was the only time he had spoken to Toby on the phone.”

KSP is working kindly with me to answer my question regarding Wise.

He was no. #2 before his latest promotion under Commissioner Brewer. I want to know if Brewer gave him the authority to sign off such paper work.

I’ve looked at the statutes regarding ATF silencer applications.

It’s as clear as any other legalese. It could be open to interpretation for any well versed attorney.

From the ATF I received an outlined PDF. You be the judge. 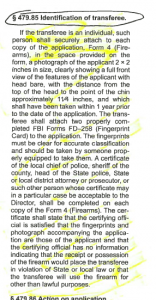 does this say #2 under the commissioner?

Additional questions I have that KSP can’t answer?

•If Wise hadn’t spoken to Toby in years why was his number STILL in Curtsinger’s phone when he was arrested?

•He only KNEW Curtsinger from the gym, but felt he knew him well enough to sign off on his silencer application. Does that concern anyone?

•Why did Curtsinger go through Capt. Wise and not anyone else?

•It’s been established that Curtsinger and Frankfort Police Chief Jeff Abrams knew each other well enough for their kids to be friends and Abrams’ wife worked out at Julie Curtsinger’s bootcamp so why go to Wise and not Abrams?

I want to give everyone a fair shake.

There’s enough conspiracy theories in these bourbon barrels to make quite a toxic cocktail.

I want to make sure I’m fair, accurate — and I enjoy bourbon not poison.

Let’s see what shakes out.

Be the first to comment on "Steroids, silencers and Kentucky State Police"