The bourbon-heist, steroid ringleader at the center of the infamous Pappygate case pleaded guilty Wednesday to numerous charges dating as far back as 2008, but his attorney and he deny any part in the original 2013 investigation.

Gilbert “Toby” Curtsinger’s defense attorney Whitney True Lawson said it was Curtsinger’s decision to plead to the charges despite his two-year battle denying them and that was he eager to get it behind him.

Lawson told the media that Curtsinger wanted everyone to know he did not commit the crime dubbed “Pappygate” in 2013 and the culprits haven’t been brought to justice.

“Toby has asked that I make it very clear to everybody. I want to make it very clear this is in no way connected to that 2013 Pappygate,” Lawson said. “We are no better off today knowing in terms of who did that theft from Buffalo Trace than we were in 2013. That investigation as far as I’m aware is still open.”

While the infamous Pappy Van Winkle bottles were reported stolen in 2013, Curtsinger pleaded guilty to a Class D felony theft charge spanning from Jan. 1, 2008 to April 7, 2015.

The plea agreement, which Curtsinger signed and agreed to, describes the facts of the case to include: the distribution of 28 bottles of Pappy Van Winkle family bourbons; stolen barrels of bourbon from the Buffalo Trace Distillery that produces Pappy Van Winkle; approximately 20 cases of Pappy Van Winkle (12 bottles per case) and 20 cases of Eagle Rare bourbon (six bottles per case) sold via former co-defendant Michael Shaun Ballard; stolen bourbon barrels from Wild Turkey Distillery.

Curtsinger, notably, also agreed to the facts of the case that he distributed the bourbon through a network of co-defendants.

Assistant Commonwealth’s Attorney Zach Becker said he didn’t know exactly how to respond to Lawson’s comments given the charges Curtsinger pleaded guilty to.

“Curtsinger’s role in this pretty well explained by the extensive discovery, investigative reports in this case,” Becker said. “I think I’ve said enough to what his role was. I really don’t know how to respond to that (Lawson’s comments). I know the case in which I indicted him and now convicted him that involves the theft and distribution of 28 bottles of Pappy Van Winkle that are sitting in the Franklin County Sheriff’s Office and the 20 cases of Pappy Van Winkle —12 bottles per case — so you are talking about a lot of bottles. In all, we have 21 wooden barrels sitting down at the sheriff’s office in evidence, one stainless steel barrel that barrel itself is probably the most valuable thing in this case worth over $10,000 — the Eagle Rare 17 (aged 17 years). 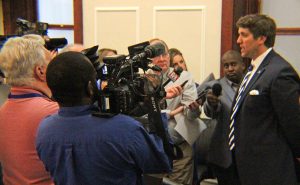 “We have the contents of three other barrels emptied by the purchasers into other containers and then we have 28 bottles of other Pappy Van Winkle bourbons. In the police reports, there’s some speculation as to how much (money) they (the crime syndicate) made.

Curtsinger, as part of his plea agreement, has agreed to testify and aid in the investigation against the last defendant in the case former Wild Turkey delivery driver Sean Searcy.

Becker recommended Curtsinger serve a 15-year sentence on the three Class D felony charges and the several steroid charges Curtsinger admitted to without probation. Curtsinger will be sentenced at a later date once Searcy’s case is resolved.

When asked about the 2013 case, Franklin County Sheriff Pat Melton said there were no further charges being brought against any other individuals saying his office followed several leads.

“We are not looking for any more suspects. I think this brings closure to this case,” Melton said. “It’s been a huge case and captured the hearts and minds of America. Buffalo Trace has been a family-run business for a long time. They’ve got great people that work there. They are not immune to internal theft like anyone else.”

If it had gone trial and Curtsinger was found guilty, he could have faced up to 20 years for an engaging in organized crime Class B felony charge. When asked if he was disappointed that the case didn’t go to trial given the amount of investigative work went into it, Becker said he wasn’t.

“No, not really. This case is one that has a romantic aspect to it, has a very Kentuckiana aspect to it. It’s at the very heart of what Kentucky is to the rest of the world — it’s bourbon industry,” Becker said. “But in the end, this is a property theft crime. This office currently has six murders we are prosecuting. This is a very large, but it also is just another case. I’m pleased with this resolution.”