There are several  open records requests still stranded on the bourbon trail.

I recently won an appeal to the Attorney General’s Office  in regards to records about a Facebook post made by the Frankfort Police Department’s chief while he was on vacation.

Instead of putting it on his own page, he put it on the department’s public page. 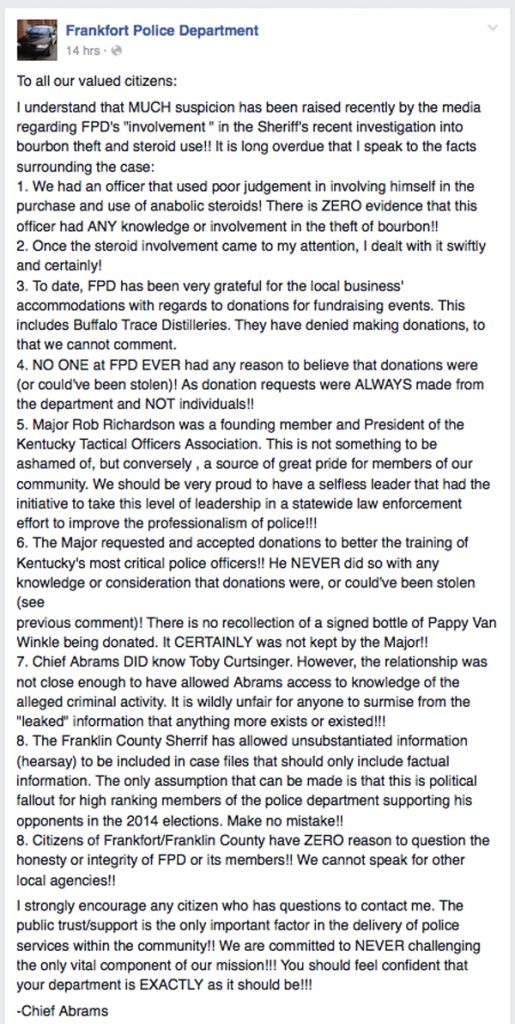 This originally appeared not on Abrams’ personal Facebook page, but the department’s page at 8:37 p.m. on Monday, June 8, 2015.

While the rant doesn’t provide any new information into the case, what it should provide to outsiders is a couple of layers revealed in the unfolding of this case: the Frankfort Police Department’s administration dislikes the Franklin County Sheriff’s Office and city officials ignore  actions such as this made publicly resulting from the strained relationship.

The ALL CAPS and extra exclamation marks removes any doubt of whether Abrams takes it personally that the sheriff’s investigation has  led to officers in his department.

Even though the reported statements have come from  an officer in his department from investigation documents, Abrams blames “the media” for raising suspicions and the sheriff’s office for targeting his department.

Instead of acknowledging it was the statements of an officer, he attaches the reports to the entire department’s “involvement.”

Neither in my reporting, or anyone else’s, have we indicated this involved the entire department.

But after a former Frankfort police officer was suspected of purchasing steroids with the alleged “Pappygate” ringleader, FPD Chief Jeff Abrams confirmed to me some revealing statements showing a strained relationship between the two agencies.

According to investigation documents, the officer in question kept telling detectives he was too busy to meet and answer questions related to the case..

Franklin County Sheriff Pat Melton thought he should meet with the police chief to make arrangements for investigators to meet with the officer.

The sheriff spoke with Abrams. Abrams said “he did not want to be put in the middle of this investigation and would not order (the officer name omitted) to meet with Wyatt (former chief deputy).”

Abrams confirmed that’s what he said and that  the sheriff wouldn’t tell him the circumstances of questioning Wells, as it was part of an open investigation, or is that because of the strained relationship?

“He didn’t feel he could divulge the information and I said I would stay out of it and suggested they meet when Wells was off duty.” Abrams said. “I wasn’t trying to keep them from talking to him. When I knew what they had and what they needed, I suggested they talk to him when he was off duty and not on the taxpayer’s dime.

There’s a story coming watch for the link.