In case you didn’t see my article posted in The State Journal, the  alleged ringleader’s defense calls for the anonymous tipster to be identified.

Yes, you read that right. The big “anonymous tip”

Attorney Whitney Lawson’s motion to compel discovery argues that when the Franklin Commonwealth’s Office gave him the anonymous tip that brought this whole thing down (mentioned here) — it wasn’t everything he asked for.

Moreover, Lawson’s motion has a grocery list of information. Some of it could be seen as reasonable defense approach to the soundness and validity of the text-a-tip operation.

Some of those items are :

• where is the phone maintained

• the individuals responsible for maintaining and responding to the tips

The contentious requests include:

In my article at The SJ you will read where Lawson argues that Curtsinger should have the caller’s or caller’s information as Sheriff Pat Melton doesn’t use a third party to scrub the anonymous numbers.

But in case you don’t know, you are not anonymous even when you call 911 and request to make an anonymous report. Just an FYI.

The anonymous text was renamed

Here’s a pic of original text in the court records, the text that led to uncovering this whole Pappygate blow up . 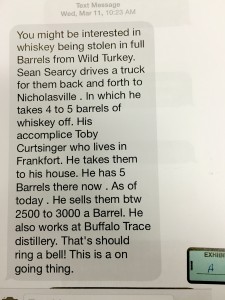 Another request Lawson has made is any recorded/written statements from Tony “Onion” Bryant.

Lawson’s motion argues that there are no statements from Bryant only police statements.

It took me ALL DAY to find it my huge pile of court docs , but Bryant only has one small chunk, paragraph in them.

Here it is in its entirety.

Is Lawson just doing her due diligence in flushing out anything on Bryant? Why is she sniffing it out? Does she think they haven’t given up the goods on Bryant or is he just the only left out of those 20-something recorded interviews and written statements?

• If the court ruled in favor of disclosing the anonymous tipster’s information, it would “not be applied solely to the facts of this case, but will necessarily impact all other criminal cases and investigations arising from its jurisdiction”

•If the court follows “ the logic of the defendant… the law-abiding citizens of Franklin County,” would be “left with two equally unpalatable choices, either to do their civic duty as law-abiding citizens and thereby place themselves and their families directly in harm’s way or simply learn to ignore and embrace criminal activity in their community.”

Here’s the link to my story today in The State Journal.