The past two weeks have blown the #Pappygate, bourbon-theft, steroid ring investigation up with a new plead and new leads.

Want to read this blog from the first entry? Click here

Dusty Adkins’ affidavit includes the alleged sale of bourbon to former Georgetown Police chief Greg Reeves who left office in Feb. 2012 and said Adkins sold him bourbon in the spring of 2012.

And then there’s these financial documents. Something we haven’t seen yet in the case 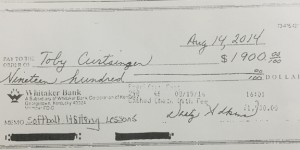 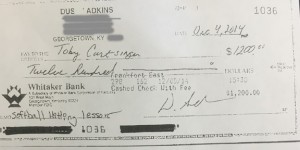 Two checks Adkins wrote and allegedly gave to Curtsinger as he thought he was selling discounted, mis-proofed bourbon to friends and acquaintances.

Notably, the memo line has what appears to be different handwriting which equates to over $3,000 for softball hitting lessons. Say what? Can you see the almost juvenile handwriting with the big circle dots on the “i”s?

An official at Georgetown College told me Adkins volunteered as an assistance softball coach for a while. So, why would he need lessons from Curtsinger?

Whose signature is in the memo line?

Lex 18 gives me almost a second of credit

Dusty Adkins, one of the original indicted nine suspects, plead guilty to a lesser and will testify as a witness against the remaining witnesses, which include alleged ringleader Toby Curtsinger.

2)An  investigation document that puts wife Julie Curtsinger allegedly near the scene of steroid buy with her husband. She sat in a restaurant while he allegedly sold steroids to someone.

Full story on these developments here

Be the first to comment on "New plead and new leads"