My first real threat on the bourbon trail

After eight months of writing about this, I have received my first real threat.

The threat didn’t come from the alleged bullying ringleader.

It came from someone who identified herself as one of the wives of the several law enforcement officers involved in the illegal activities of this investigation.

As many clean up the beer, champagne and bourbon bottles from last night’s New Years Eve celebrations, know this story is nowhere near the last drop. 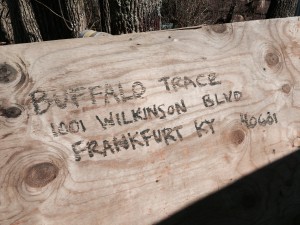 A board found behind the shed with the first five alleged barrels of stolen bourbon.

No, I didn’t press charges. The threat came from a call to my office line.

And while I can’t prove it was her, we don’t have caller id on our office phones, the very dialogue, the anger, her distaste for me, convinced me she was who she said she was.

I asked her to tell her side, or his side, of the story and the chain of events which revealed a feud between police departments, a police chief posting a rant on the department’s Facebook page, the allegation of a stolen bottle of Pappy Van Winkle used for a law enforcement fundraiser, how steroids were purchased online by both city and state law enforcement officers with the alleged ringleader and several codefendants. But she refused.

A few journalists, good journalists, write not as parasites with a taste for blood, but write with blood — their own blood, their own sweat, long hours off the clock to get to the truth.

I’m not out for anyone’s job, livelihood, to embarrass their children or ruin anyone’s reputation. I am here to tell the story.

I am here to tell the true story.

And while I can’t get her or her husband to go on record, I hope they change their minds before I’m done writing this story.

On The Bourbon Trail : so what now?

The investigation has laid down a foundation of charges ranging from organized crime, property theft to purchasing illegal substances via the Internet.

But big questions still remain on the bourbon trail.

In Kentucky, distilleries get taxed by the amount of whisky they have sitting in their rickhouses aging before the state also taxes it at the point of retail sale.

So how did these distilleries not realize, until this investigation, that they were missing so much bourbon from their inventory?

According to the Kentucky Distillers’ Association 2014’s tax-assessed value of all barrels aging in Kentucky  totaled $1.9 billion. From 2013 to 2014, that’s an increase of $81 million.

How much tax money is the state missing ?

The distillers’ association reported that Kentucky distilleries in 2013 paid $15.2 million in barrel taxes, which includes an ad valorem tax on each barrel as it ages every year, which is 52 percent more than they did in 2006.

How firm is the number of barrels the distilleries report and how verified is it by the taxing enforcement agency if no one knew barrels were missing?

I will lay out more questions and hopefully have more answers when I post here again.

Don’t go anywhere. This story is nowhere near its last drop.