To suppress or not suppress: could this be the last stop before trial?

We have finally arrived at possibly the last stop “On The Bourbon Trail,” as Judge Wingate will hear arguments for and against suppression of evidence Friday in the “Pappygate” investigation.

Between the session and a new governor, there has been no shortage of stories at the Capitol.

At the end of April, prosecuting Asssistant Commonwealth’s Attorney Zach Becker and Lawson had filed arguments for and against suppression – you can find that article here in The State Journal.

Lawson argued Franklin County Sheriff detectives didn’t have probable cause to search and seize evidence from the Curtsinger property because the anonymous tip failed to contain information that could be “independently corroborated by police observations.”

In no mincing of words, Becker responded it would take more than “magical incantations” to block evidence involving law enforcement officers in an alleged steroid ring and more than $100,000 of seized bourbon from Wild Turkey and Buffalo Trace distilleries.

The defense argued the Curtsingers should expect a level of privacy and their right to it was violated as the detectives didn’t have probable cause.

But Becker pointed out the Curtsingers couldn’t expect any privacy as those  five barrels of stolen Wild Turkey bourbon were located on property they didn’t own. 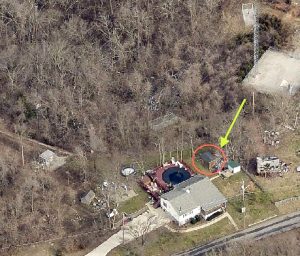 PVA overview shows the barrels were on commercial property not owned by the Curtsingers.

Countering this point brings us to Friday’s hearing.

Lawson submitted an additional response to Becker’s this week saying the prosecution shackles the expectation of privacy to property ownership and relies entirely on it.

The Curtsingers have used the commercial property, Lawson argued in her response.
For almost 20 years, Julie Curtsinger’s mother signed an affadavit, saying the couple has “mowed and maintained,” it -even if they didn’t own it.

Her mother added the outbuilding, where the barrels were found, has been there for 12 years and a “child’s playhouse” has been on the property for six years.

Given the building and area are connected to their home, Lawson argued they expect a level of privacy — even if they don’t own it.

In his response filed Tuesday, Becker said the defense is trying to lead the court “down a dimly lit path,” with court rulings scraped together over privacy and the land, owned by another party, to be considered a flimsy right to privacy.

Becker has argued the Curtsinger’s defense “flies in the face of all objective reasonableness,” and the defense’s request to challenge the search warrant and the detectives ability to corroborate the anonymous tip is “his (Curtsinger) intent to embark on a blind fishing expedition, seeking unknown evidence.”

Lawson concluded the Curtsingers have a right to the suppression of evidence as it was seized on property “intricately tied,” to their home.

Becker concluded “it may be a bitter pill to swallow,” but the Curtsingers aren’t “excepted,” from the application of the Commonwealth’s laws.

While Wingate will  not make any ruling tomorrow, hearing both sides debate the argument —and if any additional testimony or details come up during motion hour — will be nothing short of something worth sipping on.