In tracing the bourbon trail, statements revealed transactions and deliveries from Casey County into Cincinnati.

But as I write this in July based off of investigation documents from April and May, there’s speculation the bourbon barrels, or bourbon bottled from those barrels, made its way into other states. At least for the varying ages of stolen Pappy Van Winkle, they made it as far as Texas. 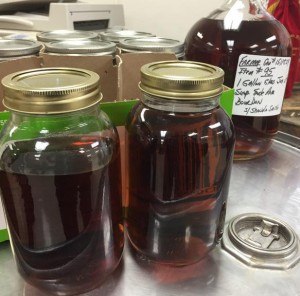 These jars and the jug behind represent bourbon a wife processed after buying it as a Christmas present for her husband. Some were later given as Christmas presents to family members. She told investigators she thought the sale was legitimate. Photo by Brad Bowman.

The Who and Where

Between Searcy and Curtsinger, they made moving the bulky barrels of stolen bourbon look  easy.

Even though these were stainless steel barrels or the bulky wooden ones we all imagine in our minds, they moved them with the ease of an object one could hide in their pocket.

Each metal hoop on a 53-gallon bourbon barrel holds the  individual oak staves in place.

Curtsinger and Searcy “allegedly” acted as those metal hoops holding the individual actors or “staves” within the crime ring in place. But after the other suspects were indicted, the ring easily broke.

To keep this short and save the details for the book, Ballard, 30, of Richmond told authorities he acted as a middleman.

Over a five-year period, he sold approximately 20 cases (at 12 per case) of Pappy Van Winkle and 20 cases (6 per case) of Eagle Rare. While Ballard has stated he received only $100 in compensation, according to the documents Curtsinger allegedly received $20,000.

He procured the sale of two barrels that ultimately went to Laurel County and the barrel for the wife as a Christmas present in 2014 for her husband.

Hubbard sold bourbon to someone he “met” on a job site in northern Kentucky and sold barrels in Scott County, Stamping Ground, Georgetown and two barrels to undisclosed men from Cincinnati.

Be the first to comment on "Tracing the bourbon trail"